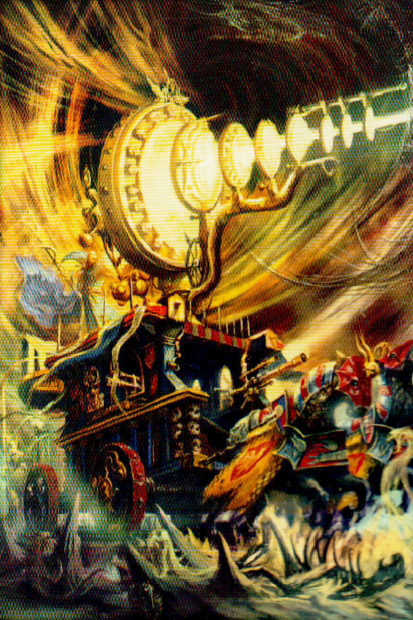 The "giant magnifying glass" is a siege unit that captures the energy of the sun and and releases it in concentrated rays. It does little to no damage directly, but can inflict crippling to minor burn statuses depending on how far away your target is. When used up close, if your oponent doesnt react quickly enough, they may be facing a charred mega structure within 1-2 turns. When used from afar, your oponent will be pressed to prevent their walls from slowly burning.

As you see, this unit doesnt deal well with flesh and blood units but punishes those who dont protect their valuable builders.

Just for added speculation, an upgrade to this unit could be a giant telescope that does everything that the former does but adds +5 sight and spy detection
Last edited by Pyro on Wed Oct 02, 2019 3:07 am, edited 2 times in total.
"You want that on fire? Yes yes on fire. On fire it is."
Top

Not bad idea as for me but i am not sure if it is possible to apply multiple stacks with single ability on current engine.
Draft for new unit for newcomers © by Makazuwr32™.
Top

Actually no.
It deals only 40 damage.
If unit has more than 44 hp it won't instadie (undead dragon for example or olog hai despite increased damage from burning).
Draft for new unit for newcomers © by Makazuwr32™.
Top

With testing (something i shouldve done beforehand

) i found that 10 stacked fire does insta kill. Currently though, im confused as to how fire works as on the castle, one fire status will 125 damage per turn but say on a golden skeleton rider, it only does 3. Regardless, im gonna tone down the fire affects and suggest a new status identical to fire, but X times stronger
"You want that on fire? Yes yes on fire. On fire it is."
Top

At 5 cost, within 4 tiles away, using both of its 2/2 attacks, this unit can raze down a castle within 2 turns if nothing is done about its confrontation. Keep in mind it only has a speed of 2. Is this balanced? All ears
"You want that on fire? Yes yes on fire. On fire it is."
Top

Maybe a bit higher amounts of burning but only 1 action.
Like 5/3/1.
Draft for new unit for newcomers © by Makazuwr32™.
Top

I think it is balanced but aside from that:

1) we cannot add multiple instance of burning in a json
2) those things required quite some times to be used effectively so I can't think of them being used on something different than a building or a ship into a port
3) dwarves will have ranged siege with longer range (but for a higher cost)
4) those mirrors (they were mirrors) will be something difficult to carry around.

B) an ability for units with a mirror shield that can apply burning, maybe during a defensive stance (it is believed that originally it was made by using multiple mirrors or polished shields).

I think it could work for both ships and tower. But not a wooden tower. With it though we can finally change the dwarf guard tower to normal cannonball shots rather then lava or flaming rocks. It would be nice if the damage could increase over time or something, but I don't think that's programmable, or the engine might not support it either.
Top

A line of this cheap mirrors could really cause a lot of burning compared to a few costly towers.
Age of Fantasy design leader
Top

What if make this siege to work as trebushet?
Cart mode without abilities other than transfrom with some speed (moving form) and magnifying glass mode (siege form without moving)?

I think this way it can work.

As for many stacks for single turn i have idea:
5 abilities with ranges 4/5/6/7/8, 1 actions cost, 1 turn cooldown and each exept last one give +1 action. Each just applies 1 stack of burning. This way in range 4 you will be able to apply 5 stacks and in range 8 only 1 stack in single turn.

Yes, it is more likely to be made this way. Anyway it can't have multiple burning in one action.

To do that it should have multiple actions.
Age of Fantasy design leader
Top

Updated my previous post.
Draft for new unit for newcomers © by Makazuwr32™.
Top

I was thinking to something different.

Now we can set action cost for abilities so high range ability might require 5 actions while the most basic can use less.

Btw we also need to check how much damage is dealt by a single instance of burning to the most vulnerable targets.
Age of Fantasy design leader
Top

Adressing the flavor of the unit, despite what the picture may seem like like, the unit its intended to mount several refractive lens, perhaps made of large transparent gemstones found within dwarven mines, that concentrate passing light. The are not mirrors.

Also, I tried to avoid adding many actions to the unit because I thought it would counter undead hordes too well, thus why i suggest additional identical fire statuses that are X times more potent
"You want that on fire? Yes yes on fire. On fire it is."
Top

Good idea will do

:Edit: the changes I made are this

I would only prefer to use regular range because it will allow to make things easier to look and count.
Draft for new unit for newcomers © by Makazuwr32™.
Top

In the end they will have the same effect overall, the only thing about the ability is that it won't be dodged but it won't be able to target inside tcs

Hm here you are right.
Draft for new unit for newcomers © by Makazuwr32™.
Top

+1 alexander, i think the second option is better aswell. Also, "align lenses" is such a perfect name and immerses the unit even more, i like it
"You want that on fire? Yes yes on fire. On fire it is."
Top

I guess it is settled.

I only think we need some testing to balance how much damage a fire instance does so that we can balance the max amount of actions and starting range.
Age of Fantasy design leader
Top