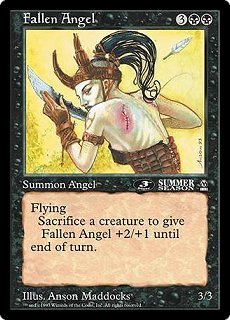 What about an undead unit that becomes stronger by sacrificing other units?
Age of Fantasy design leader
Top

Sacrifice an ally to heal and gain additional power for several turns? Sounds decidedly like it's either undead or some more goblin shenanigans, and I think it's about time we brought the undead to sharpen some double edged swords.
Currently residing at the local ninja academy. I'm still watching though.
Top

It is dark magic for sure

Please note the scar. There was a wing there once. Have any stats in mind?
Currently residing at the local ninja academy. I'm still watching though.
Top

Yes, but we won't be seeing them in game.

I still have no stats in mind but i was thinking something weak that becomes far better with the sacrifice.

Also i think undead might need some intermediate cost, so something like 4 or 5
Age of Fantasy design leader
Top

Consume life: destroys an ally to heal for 10, restore 1 action (free action basically) and gain +5 attack and +2/2 armor for this turn only. Can be repeated as much as you want, but you will run out of troops to feed it pretty quickly, even in undead.

Sound good? A couple skeletons and this thing can go toe to toe with some massive orcish stuff, but it's gonna cost you.
Currently residing at the local ninja academy. I'm still watching though.
Top

Is the consume life at range 1?

+5 cumulative attacks seems a bit too much considering that undeads might easily farm a lot of units.
Also i wouldn't go for the armor bonus but i would give it temporary hp (for example +5 maxhp/hp for any sacrifice)
Age of Fantasy design leader
Top

Remember the buff is only for the one turn, so it's easily compared to adding the damage potential of the killed unit, let's say skeleton fighter, being the most likely. Skeleton fighter has 7 power, so adding 5 is essentially assuming 2 armor gets taken off. True, you can have the skeleton attack before you kill it, but this just moves it's next attack to help this unit. Its a long term loss for immediate gain. Yes, it's at range 1. Instead of armor or temporary hp, let's just say max hp goes up 5, while current hp still only goes up 10. If you don't like the idea of Infinite use in a turn, give it 2 or 3 instances of the skill and cooldown 1.
Currently residing at the local ninja academy. I'm still watching though.
Top

I mean that loosing six 7 damage units to gain a +30 to damage is far better (you can really overcome a lot of armor this way) and those units can still deal their attack before as you pointed. Loosing some swordsman is not a big deal since they can raise more easily.

I would prefer a single use on that turn even with a bigger bonus.

Also the temporary hp are effectively additional hp (eg. if you sacrifice a unit and your unit is already at full health you still get more hp).
Age of Fantasy design leader
Top

Not sure how easily even skeletons can be replaced if you have to keep sacrificing them, but if you prefer a bigger, one use bonus, then it's better to make it stronger and have cooldown 1 to prevent chaining it. Increased max life vs temporary life is an interesting debate. Max life is more permanent, and can be healed later if lost. Temporary life could build up quickly, but once lost you need to take the same measures to replenish it. Either way sounds good to me honestly.

Another idea has occurred to me to make this unit a little smaller, then give it the veteraning power from zurgo helmsmasher. This only triggers off killing enemies, so it gets bigger, temporary bonuses from killing allies to pave the way for the smaller, long term bonuses from killing enemies.
Currently residing at the local ninja academy. I'm still watching though.
Top

I tought of that. It makes the unit loose some flavor but is easy to script and probably more balanced.
Age of Fantasy design leader
Top

So far I haven't seen helmsmasher used....at all really. I tried a few times against ai, but ultimately decided that the effort it takes to babysit to a sizable level is just too much compared to using bigger units. Especially when master orc warriors are cheaper and stronger. This being said, I think I'd like to see a unit that can use alternative means of self buffing to activate veteraning more reliably, with a higher chance of survival.
Currently residing at the local ninja academy. I'm still watching though.
Top

That idea would fith an abomination-like monster tough (like adding extra limbs to the same monster).
Age of Fantasy design leader
Top

Heh. Sounds undeadish. And not a bad idea.
Currently residing at the local ninja academy. I'm still watching though.
Top

Can we make an image before setting this as accepted?
The Crusade never ends...
Top

Look for some images, for inspiration.
Wise, Might, Loyalty. Forever stands Warfell.
Top

https://yamastar.artstation.com/projects/VXJgX or maybe this
Top

This is accepted. Let's not forget about it. besides unit sounds cool with good abilities.
The Crusade never ends...
Top
Post Reply
21 posts • Page 1 of 1