Hi
Before i 'left' the game,
I worked on units for a Crusader Campaign!

Now i am fit enough to continue this campaign!
1.Daniel is it ok for you if i use around 15 new units for the campaign??
2.If anybody need a unit , request me.
3. If you have ideas for it write them here.
4. If anybody wanna help me design the enemys, say it here. 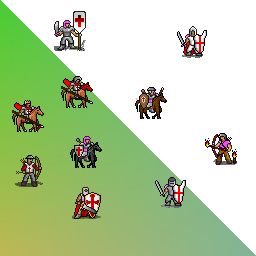 15 new: sure if we hopefully can have at least 10 from them as normal buildable units in game.
Top

Its not that they should be completly new units with
New stats, they yust should remive the icons of some normal
Units like swordsman or archer with my
Crusader units in this campaign.

A fits map is out (nearly finalized).

Please test and give feedback.
If some historical facts are wrong or
If you know something (have a map idea for later)
Tell it to me.

Hi
I planned a new structure.
Sandstone Tower.
Anybody has ideas for stats??

My idea is less hp the guard tower but same attack

slightly weaker, can hold more units?
The day is coming when a single carrot, freshly observed, will set off a revolution.
Top

yes i am emailing with him.

and he must be right, we must be cautious about religional things and other political things.
Top

That's right sir so what happened now to the crusade map??
Have a nice day everyone
Top

silentz27 wrote:Guys what we do I look at the play store and I see a 1 of the complain for the holy wars

What was the problem, because it doesn't show it for me...
This is Hungary and winter is coming.
Top

I saw it. He basically askes that we remove all religious battels as they may offend some people (I think this person must be very sad)

Here is the actual review 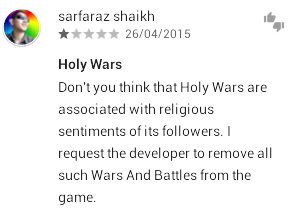 Actually.
Think a noment about it and google stronghold crusader.

I think that the ,,Holy wars'' The crusades are only history and happened so far.
That war has nearly nothing to do with religoon and if a muslim man is offended by this type of campaign, then he can do against it. This is a game which contains historical battles, and ,,fantasy'' campaigns. I reall believe that hater gonna hate. So We should put a disclaimer to the bottom of the campaign maps' description
This is Hungary and winter is coming.
Top

Actually, these battles shouldn't offend anyone. I am not hating anyone, but I think that if something may offend you, you won't go there knowing it.
In my opinion it would be enough if we put a disclaimer/warning like thing on the map description.
This is Hungary and winter is coming.
Top

Stronghold crusader,Sronghold crusader 2,Anno 1404,Crusader Kings 1,Crusader Kings 2,Europa Universalis,Medieval 2 Total war,Age of Empires 2,Kingdoms:Crusade
The name of some of these games are even about crusade so yeah he cant complain,look how many games have this who aim for something that happend in real life
Top

Yes!
You are right. Personally I only know a few of them, but they are completely based on crusades.
This is Hungary and winter is coming.
Top

Uhh patroid can you create some heroes for my map( with devs permission to create it )
See my topic gaul war
BEWARE!!!!The long lost empire of phoenicia is rising- The world is but just near the golden age,wherein men played and frolicked,without any worries at all

Thanks
BEWARE!!!!The long lost empire of phoenicia is rising- The world is but just near the golden age,wherein men played and frolicked,without any worries at all

I m a Muslim by the way and I m planning a campaign where Muslims and Hindus revolt against the British during colonial rule of India so I think it is okay to have religious historical wars too, and if u don't play this campaign just Cuz u r a Christian that proves u r a hater, always remember whatever the religion humanity comes first

Edit: by the way that campaign is more of a RPG style one about a certain hero's quest so it is not completely historically accurate though

Last edited by godOfKings on Fri Nov 10, 2017 5:52 pm, edited 1 time in total.
There is no place for false kings here, only those who proves themselves to b the true kings of legend, or serves under me

For I watch over this world looking for those worthy to become kings, and on the way get rid of the fakes and rule over the fools
Top

lol nobody on these forums r haters. We accept each other, what do you think; HOW THE HELL CAN A SERBIAN BECOME SO POPULAR!?!?

I was talking about silent27
There is no place for false kings here, only those who proves themselves to b the true kings of legend, or serves under me

For I watch over this world looking for those worthy to become kings, and on the way get rid of the fakes and rule over the fools
Top

About that i agree
The Crusade never ends...
Top

oh, you are serbian, noooo!