by makazuwr32
@Alexander82
Can you do for me last favour and delete all my posts in AoF including this one?

If i am bothering you so much.
I won't return still into aof forum because i am not needed here.

by Alexander82
You have the right to do it. If you wish so.

I won't waste my time searching for you posts.

If i am bothering you so much.
I won't return still into aof forum because i am not needed here.

I dont know what had happened, please dont make any steps to this direction.
In email please tell me what is the problem/argument here.

@makazuwr32 you are a good and active user on forum so we need you here.

by makazuwr32
Alexander82 thinks that most of my work, my ideas and things which were implemented because of my request without his permission are wrong. No explanation why he doesn't like it. Only because "he didn't accept it".

I won't delete posts but i won't bother alex with my suggestions anymore.
I am out of aof forum.

Just 1 more example why i don't want to take actions in this:
Hamletbacks + goblin grenades are most op thing in whole game. Alex says it is perfectly fine and that he won't change anything.

by Stratego (dev)
i am sorry to hear that this led here.
i worte you an email, please discuss it there maybe we can find a solution.
thanks!

by makazuwr32
I don't know. Alex just don't want to work with me. I've sent you all that i know.
I won't leave forum in general but i will leave for some time aof. 1-1000 days.

You don't want to work with me

Every time I told you to wait because there were many things planned, you didn't listen and continued complaining and sent me links with extreme walls of text telling me to change things as you planned.

Every time I took a decision I've been told "but maka said..."

You also can't recognize if an image is fit for the game when you see it when I make something.

Since we can't basically work together I don't really care if you stay or not. I just consider your posts for what they are and ignore every total rework I see when it basically go against what was planned.

I can't make one thing while ten others are changed behind my back and you are welcome to go wherever you like and do as you please with your posts (not that I would use them, anyway).

by makazuwr32
I see. Alright than i will wait for implementation and all fixes you want to make.

I know now that you don't like 2 things: nerfing orcs and walls of texts.
I will try to be shorter later.

by Alexander82
I don't really like nerfing in general.

I always told you that we can scale things differently (for example reduce goblin grenade damage) and make other adjustments (making goblin grenade start grayed to avoid spamming it since low cost units are more likely to die before they can use it.

You just said that it is op, I always answered that we can adjust it without removing it.

You told me in private about the boar rider. I told you we can raise the cost but I wanted it to stay as it was.

I had many Ideas for dwarves that would have made them much different from the other races but you never listened to me.

I care for balance too (and that's why I didn't want to nerf orcs, cause I wanted to pump up every race in its own way).

by makazuwr32
Wait i haven't discussed boar riders with you in discord.
Maybe someone else, not me.

Yes i was wrong on insisting of implementation for their separation change.

by makazuwr32
Oh. Right. Than show everything.
Especially how you did not reply on my arguments.

What did you said in reply? 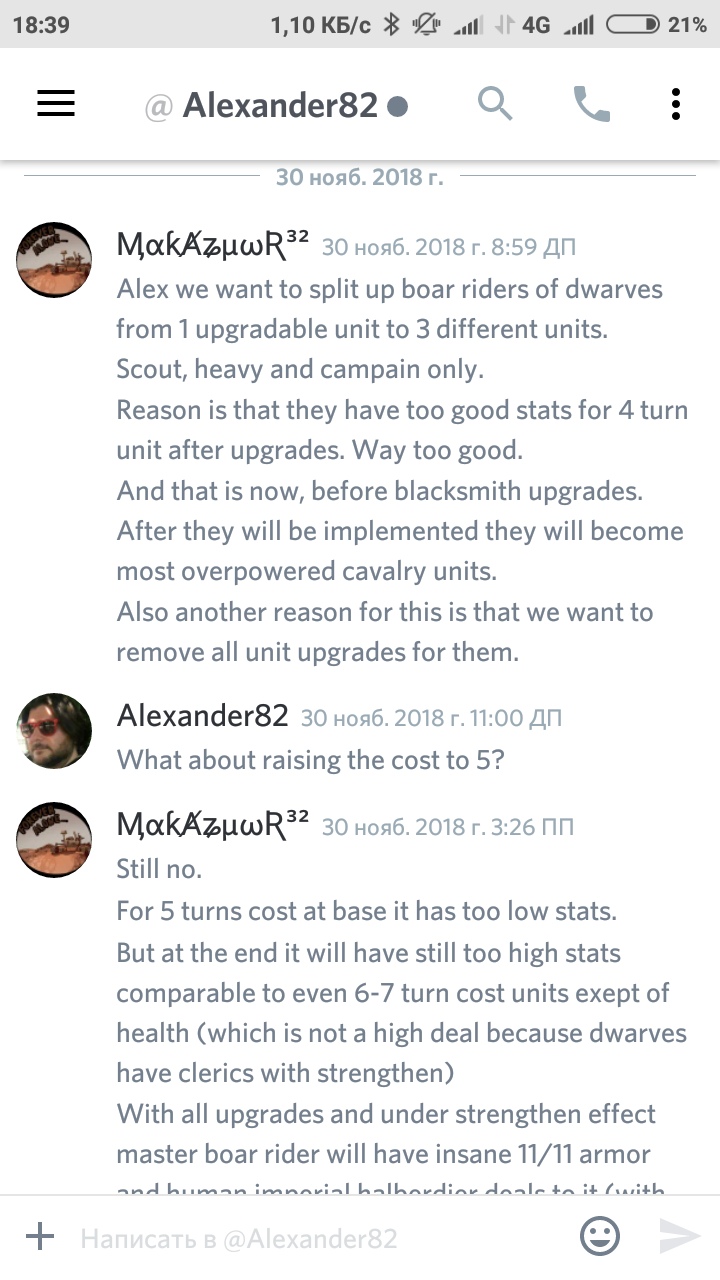 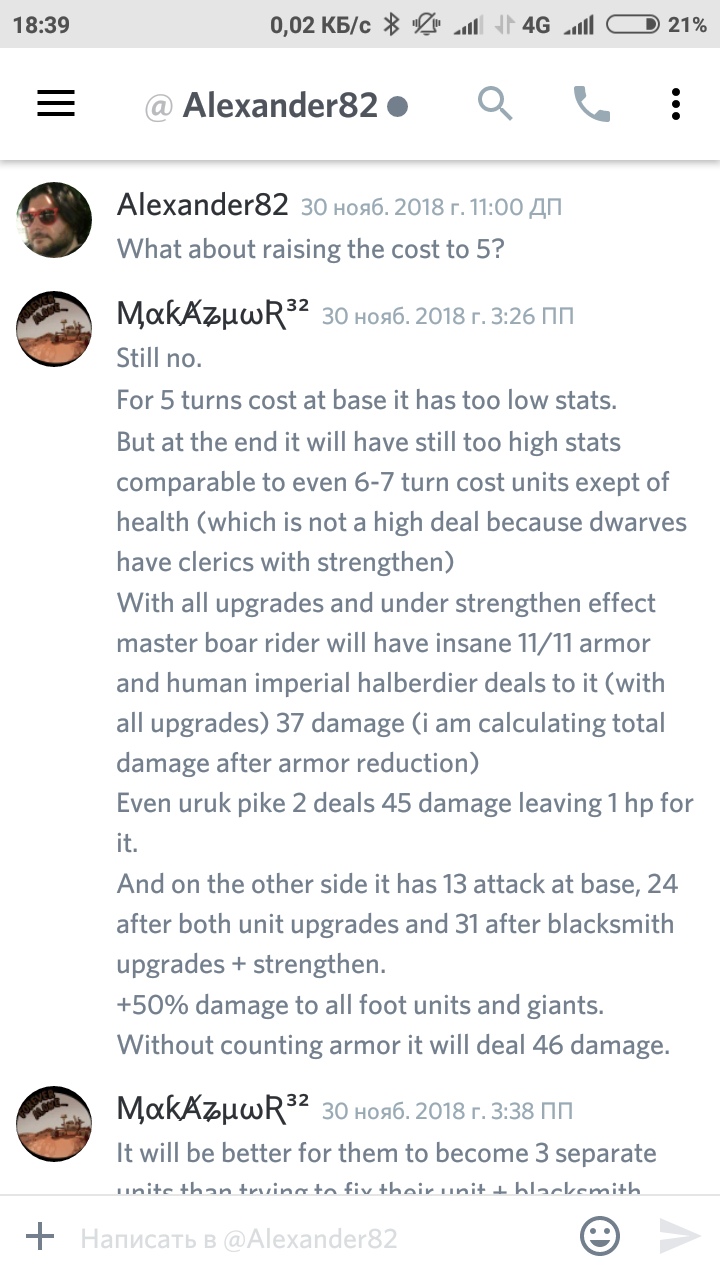 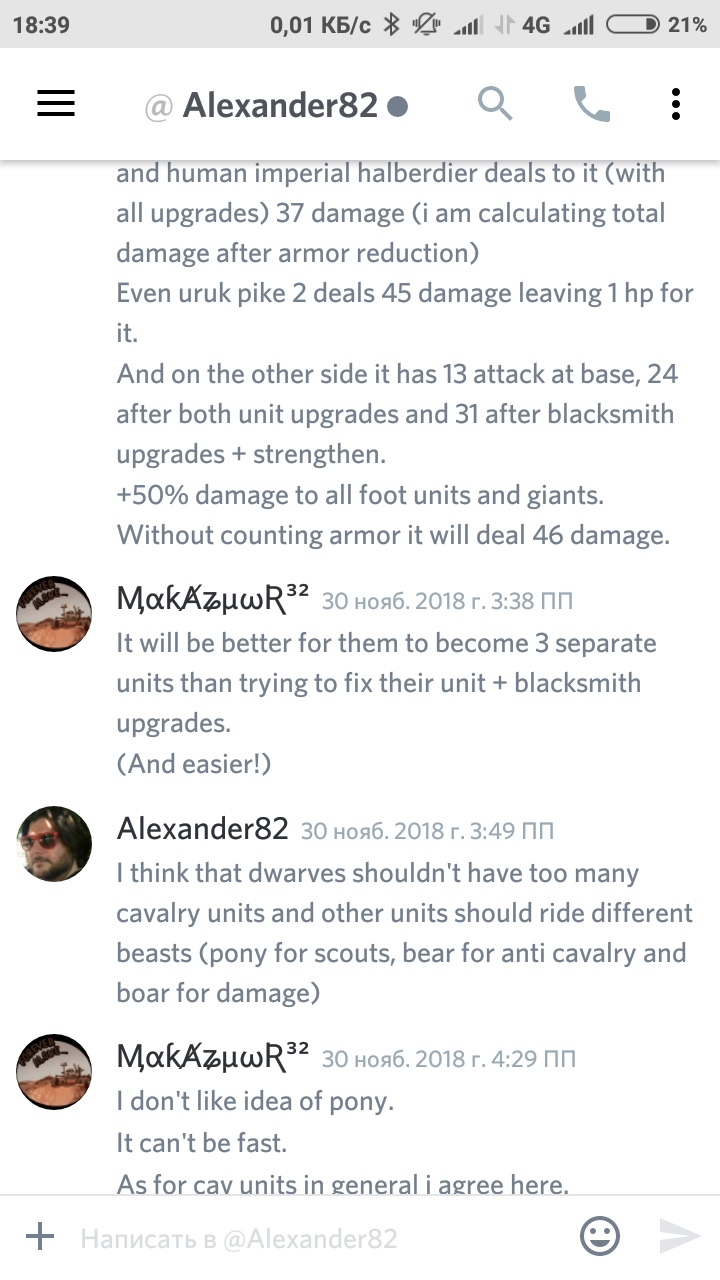 I am not saying that i wasn't wrong, alex. I was wrong, i declare that. Feel free to revert this change if you need or want.

What i am saying is that you didn't argument your position at all.


You know... those walls of text are not just suggestions just because i want.
I played many games, found many problems. I am trying to fix them. I am suggesting everything with argumentation and battle experience.

by Alexander82
You know that I couldn't be active for serious reasons.

That's why I couldn't always read every long answer promptly (and Discord doesn't always show me notifications). That didn't mean you could do as you please.

I can't always be forced to stay hours on discord, even more that I had an important competitive exam for my job.

Discord can be an addition but it shouldn't be something you can't stay without.

Also that subject could wait since dwarven techs weren't in. There was no hurry to change it.

by makazuwr32
I agree here now.

Here were few suggestions for dwarves from me to make them less op without big changes for their units because some Alexander82 wanted to keep zeppelins for dwarves as well as some other units. 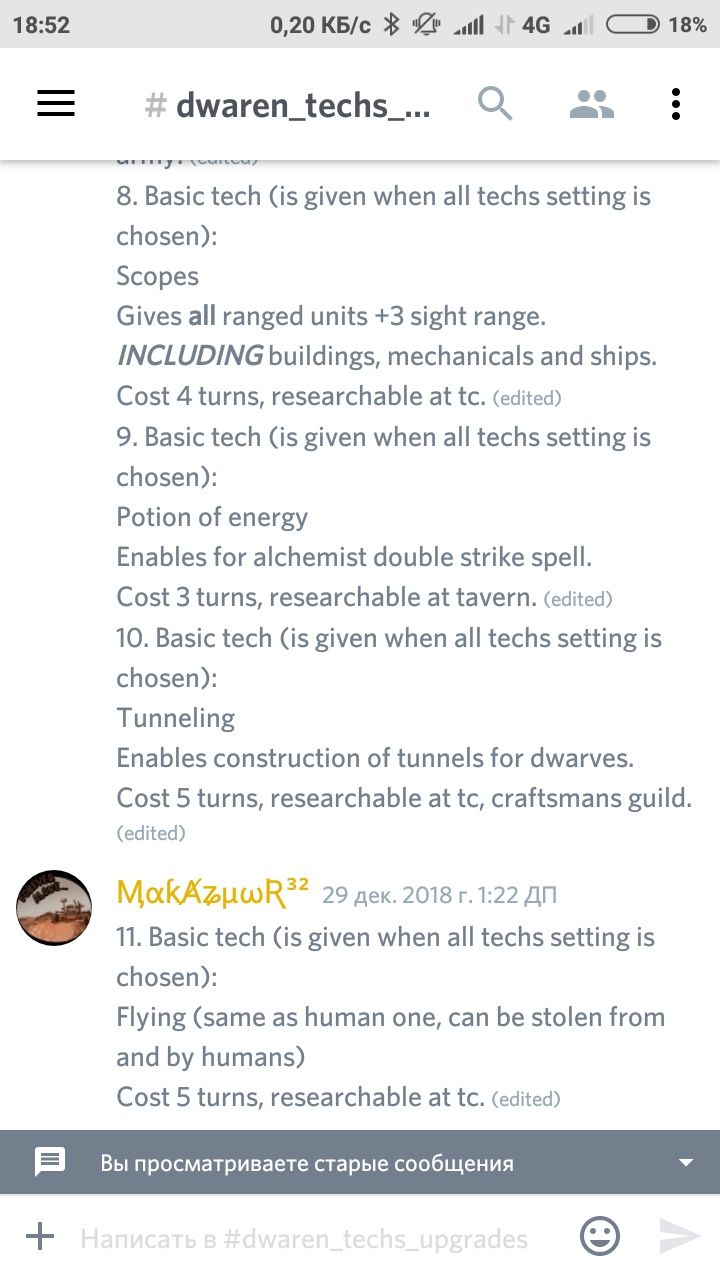 Especially flight.
I suggested this tech for dwarves because you wanted to keep zeppelins for dwarves instead of putting them to gnomes.
I came towards you.


Please alex, if stratego will ask for me to stay and work with you, argument your position. Why you agree or why not. Not just like you did here with holy order expansion (alas i understand and agree with your arguments you provided in discord).
We had great discussion about dwarven blacksmith upgrades and gunpowder upgrades.

I alway said people that I haven't nothing against creating other variants from other design leader.

When I wasn't leader I alway referred to the one who were and used the board as one among the other forumers.

That brought me to become less open to every wall of text and total rework of what was in game.

I agree abou Dwarves and Scalefolk but I already had guideline in mind that were totally ignored.

Dwarves were meant to have higher cost unita and both upgrades (a lighter version, like humans), techs and another kind of tech that was based on runesmithing (for example adding elemental effects to weapons and such)

This way we might have gone over the usual +1/+1 mechanic.

Scalefolk are not meant to have upgrades.

They are one step over animals, much more than orcs.

They should have had a lot of techs (mutations based on draconic blood and similar things).

Never have been made as meant.

Another reason I didn't argument

My first role as a design leader is also to take care of the look of the game and the units made (those that are part of the base set, that had to be expanded cause od the addition of many subraces proposals) were meant exactly to look as they are and also many of the alternatives haven't the right quality to be in game (e. G. The shading, the use of color, the style used to rework them, since they are basically edits of my images).

Those kind of comments made by someone that can't recognize the faults in those images don't necessarily need an answer (you brought to me the same arguments many times and I can't always tell you the same things).

by makazuwr32
Alright. I am sorry. I was wrong here too.

by Alexander82
I assume we can go on then.

We should basically adjust everything about scalefolks and dwarves

I'll write down guidelines soon so you can make your suggestions based on those races logic.

by General Brave
It seems that I need to apologize also, because of my actions. I created all this mess, And I will work to fix it.

by Alexander82
Thanks General. I will need your help to adjust every json needed

by General Brave
sure.

by Stratego (dev)
i m very happy to see you are getting close to a consensus!
And also ask everyone to listen to Alexander's guidelines as he is the leader , and i personally think he is a good one - and fortunately he gets more time on game from now - that is very very good!

Also all other forumers are also very important, especially the active, creative and open minded ones likeyou all are! With this community the game can be more interesing and FUN!

Also i ask everyone to talk to each other nicely because never forget: in writing there is very easy to hurt someone, even if it was not ment to.
the written text is missing many communication element that are included in the "live" face to face talking (reactions, micro movements so many other metacommunication things).

so be patient, and if anyone feels hurt/anger/upset/offended please try to remember that in writing it can "look" wrong, and maybe it was not intentional - or not in that "strength".

so i hope we can all work together, because dont forget this whole thing is for FUN, nothing "serious"

ps: if anyone needs some help in any offended/hutry situation, feel free to email me about - maybe i can help solve problems from a third point of view.

by Tankhead
Unexpected to see this.

by Lynx Shafir
I'm glad you willing to cooperate
What might Benefit everyone.
You both contribute to this game and I was very disappointed that ends this way

It's hard to make anything if you want not to communicate and one side ask a new designs while second has own idea,
Fighting and/or ignoring each other..

If you blend to compromise can be fun for everyone and won't lose great members.
And deleting ideas among which I'm sure are good ones, is fool move..

I was asked for many redesign especially scalefolk buildings so if let me know if you figured out things,and neither mine time will be in vain, so I continue the project according to that.

Thanks you @Strategist who convinced this two stubborn man to cooperate

by Stratego (dev)
it was not me: they did it, they themselves deserve all the rewards

i just saw it went the good way.
and i am also glad we are back in a cooperative path.

by makazuwr32
We just needed to clarify everything what happened while alex was missing and to make borderlines for us (mostly for me and for directions where do we want to move aof. After discussion also i must say that we have quite close vision of expanding and improving aof.

by Alexander82
Yeah. It seems like that we can cooperate as one single team, right now.
All times are UTC
Page 1 of 1
Powered by phpBB® Forum Software © phpBB Limited
https://www.phpbb.com/